Posted on August 11, 2010 by Picture This Productions

On the morning of Sunday August 9th, Toronto cameraman, James Klopko, filmed Vivian and her father Hubert’s last hours with Vivian’s mother, Eve. They stuffed some final items into suitcases and drove to Pearson airport. It was an emotional goodbye –  they were leaving Eve behind alone in recovery from her diverticulitis attack, as they readied to board the plane that was supposed to take all three of them to China.

Until a week earlier, Eve had planned to be alongside Vivian, helping her daughter experience the visit back to her orphanage. Now Hubert will be the one to stand alongside Vivian. Sure, they’ll email, they’ll Skype everyday. But the looks on their faces say it all – this wasn’t the way it was supposed to be. The camera captures the final waves before of Vivian and Hubert they disappear into the security area. Eve puts on a brave face.  She’s going home to check on available tickets for the next flight, diverticulitis be damned- at least until common sense wins out.

Sixteen hours later on August 10th, co-director Changfu Chang and his crew wait together in the Shanghai airport for the arrival of the Montreal flight. They catch sight of Vivian and Hubert on the airport’s huge projection screen 60 seconds before they arrive, giving the crew time to train their lens on the tired, jet-lagged duo. They capture Vivian and Hubert’s first moments in China, the beginning of the winding trip that will bring Vivian to her orphanage, to her heritage and to comparing lives with other girls who were adopted within China.

And what is happening behind the camera lens? Twelve hours apart, the Montreal team and the China crew send a flurry of emails back and forth at increasingly odd hours, trying to solve last minute production problems “Do we have a contact person at the Canadian Pavilion at the Shanghai Expo?” “When should we set up a Toronto crew to film Eve’s side of their daily Skype calls?” 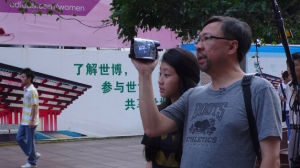 The Canadian team has it relatively easy now.  It’s 10 AM in Montreal, Canada and at the Picture This office, we’re fresh into our day.  It’s 10 PM in Shanghai and the Chinese team is just wrapping their gear after a 12 hour day of filming with Vivian and Hubert. Everyone is tired and HOT- it’s 37° C (close to 100° F!) in Shanghai. Vivian and Hubert are having fun but are jet-lagged. Plus, having a four-person crew trying to capture your experience is exhausting! Hubert is having a late night video call with Eve but Vivian is already crashed out, asleep.

But the crew is still far from shut-eye. Co-director Changfu Chang and cameraman Jiandong will review the footage they’ve shot that day, and maybe digitize a little to send to upload to co-director Maureen Marovitch back in Canada. Then he’ll write up an email about how the day’s filming went and any schedule changes they foresee for the next days. Production assistant & translator Yuan Li uploads some snapshots she took during the shooting day for the blog.

Tomorrow, they leave for a 6-hour express train ride from Shanghai to Nanchang to pick up the adoption permission letter that will let them visit Vivian’s orphanage. Soonafter, they’ll be meeting Shumin and her family nearby. Vivian will be spending several days with them, getting a glimpse of what her life might have been had she been adopted in China. The mood is shifting from tourist fun to a more serious emotional journey. The camera continues rolling…