Posted on October 27, 2010 by Picture This Productions

How does being filmed impact documentary participants?

As filmmakers, we always wonder what the impact will be for the people who agree to be part of our documentary films. The incredible variety of reality TV shows make it seem almost normal to have cameras following people around 24 hours a day, and then exposing the most minute details of daily life to a national audience.

As documentary filmmakers, we hope that our projects can explore bigger and deeper issues than the average reality TV show, and also take care of those who are part of the project in the process. 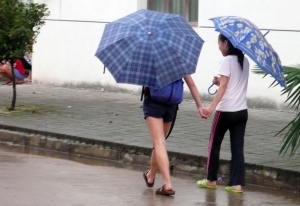 In the “The Invisible Red Thread”, we compare the experiences of Vivian Lum, a girl who was adopted internationally out of China fifteen years ago, and the experience of Shumin Zhu who was adopted by the Chinese family who found her around the same time. Two lives that start from the same situation take two very different paths… until suddenly they are part of the same documentary.

So two months after the cameras stopped rolling, we got back in touch with the parents of Vivian (in Toronto, Canada) and Shumin (in Ruichang, China) to see how the experience touched each of these teenagers. Co-director Changfu Chang spoke with Mr and Mrs. Zhu, while co-director Maureen Marovitch was in touch with Vivian’s Mother. Here is what they told us:

CHANGFU’S REPORT: “In the interviews I did this summer with Shumin, Mr. and Mrs. Zhu, they all were feeling that their lives were changing for the better – just because of the newly developed relationship with Vivian and her family as well as with members of the crew of this documentary. They could feel that the villagers looked at them differently, with more respect. The Zhus are poor people without a great deal of status in their community, but being part of this project caused their neighbors to look at them with a new perspective.
.
Now two months later, Shumin is doing great in middle school. She received the top three highest scores in recent mid-term exams. With the calls she is receiving from me and the journalist who wrote a story on her (for Marie-Claire magazine-China), she is feeling a lot more confident about her life and is growing more extroverted.”

MAUREEN’S REPORT: “Vivian’s parents report that the change in Vivian is very interesting. The trip to China has had a profound and positive impact on Vivian. She is really enjoying school this year and seems to have turned over quite a new leaf, keeping up to date and being very much more organized than ever before. Overall, her parents report that the trip has given her a greater maturity, calmness, and confidence.”

So far, so good! We’re looking forward to hear what the families will say about the early edits of the film. We begin editing November 1 with a rough cut ready just before Christmas. We’ll keep you posted with more updates and news in the next few weeks!