Posted on March 13, 2012 by maureenpicturethis

How did you celebrate International Women’s Day on March 8th? We’re stretching events through the month by being part of a screening series in Ontario highlighting women’s issues around the world.

The Invisible Red Thread, exploring international adoption issues through through one girl’s journey from Canada to her birth city in China, will screen on March 17 2012 at 1:30pm with co-producer/director Maureen Marovitch answering questions after the screening via Skype. 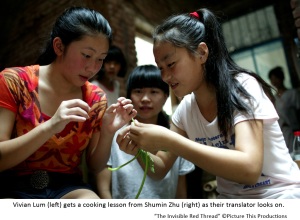 Visit the website to see the full festival schedule at Richmond Hill Library, programmed by Chanda Chevannes, an award-winning documentary filmmaker with The People’s Picture Company in Toronto.

We are happy to get in contact with Chanda for a short interview:

1. Why did you choose the film The Invisible Red Thread among the three series features?

I really appreciated the perspective of The Invisible Red Thread. China’s one-child policy has been a common topic of discussion in the international community, especially amongst those of us who are particularly concerned with the status of women globally. But I hadn’t previously seen a film that encouraged its viewers to think about the policy through the life of a young girl who was adopted from the country. The discussion often stops at China’s borders. It was very illuminating for me to see into Vivian’s life – and to see all of her reactions as she travelled back to China. In this way, The Invisible Red Thread provides me with a new look at China’s one-child policy, and this look is shaped by the experiences of my neighbour – another young woman living in Toronto.

2. What do you hope to achieve from this screening?

The screening is being held at the Richmond Hill Public Library (RHPL), and the library’s mandate is to facilitate education and learning for their patrons. The community serviced by the RHPL is diverse and vibrant. So, I’m hoping this screening will reflect both the library’s educational mandate as well as its diverse and vibrant community. I’m hoping that the audience will engage deeply with the film and with the Q&A session with Maureen Marovitch (the film’s director). I’m hoping that they will learn something new and that they will walk away from the program knowing a little bit more about this important women’s issue – having seen its impact on Chinese girls raised in Canada and in China.

Also don’t miss the broadcast coming up on OMNI.TV on April 8th!