Posted on September 12, 2014 by Picture This Productions 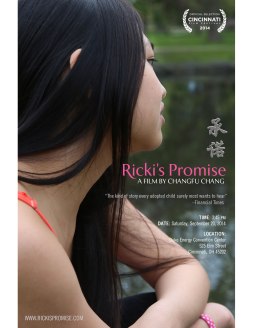 What happens when an 18 year old American girl adopted from China returns to her birthland to spend summer vacation living with her recently discovered biological parents?   That’s the situation of “Ricki’s Promise”, a new feature length documentary. The 84 minute film is set to have its world premiere at the Cincinnati World Film Festival on Saturday, Sept 20 at 3:45 PM.  Directed by prolific producer/ director Changfu Chang, who led the filming in China of 2010 of our own documentary “The Invisible Red Thread”, his latest documentary follows Ricki Mudd, 18, as she returns to China to embark on a journey to understand the past. In a culture now foreign to her, with biological parents she barely knows, Ricki  struggles to unravel her own identity. Meanwhile, her biological parents confront old wounds as they get to know a daughter they last saw nearly two decades earlier Set against the backdrop of culture, Chinese politics, and  larger adoption ethics, this film will soon be widely available for sale. Changfu has a special connection with adoptees and their families, as we got to see when he directed our filming crew in China. We wish him great success with his newest documentary! To learn more about Ricki’s Promise,  visit the film’s official website or check out the trailer below. Click to learn more about the Cincinnati Film Festival’s programming.

1 Response to Ricki’s Promise, a film by Changfu Chang